Skip to content
February 17, 2020
1. What is data exchange?
Broadly speaking, any data forwarding can be called data exchange. The process of using the switch is Ethernet-based data exchange. The network data can be exchanged to reach the designated port.
2. What is a switch?
A switch is a network device based on MAC address identification and capable of encapsulating and forwarding data packets. The switch can learn the MAC address and store it in the internal address table through the originator and target receiver of the frame. A temporary switching path is established between the data frames directly from the source address to the destination address.
3. What is an industrial Ethernet switch?
Industrial Ethernet switches, which are used in industrial control field, are open and widely used due to the adopted network standards. They can adapt to low temperature and high temperature, resist electromagnetic interference, prevent salt spray and have strong earthquake resistance. 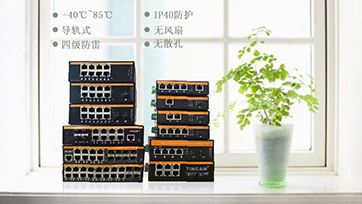 4. What is the product classification of industrial Ethernet switches?
Industrial Ethernet switches can be divided into non-management switches and managed switches according to their management. The main difference is the management functions for advanced networks and whether they support redundant backup functions. They can also be divided according to port speed and structure.
5. What is the bandwidth of the switch backplane?
The backplane bandwidth of the switch is the maximum amount of data that can be handled between the switch interface processor or the interface card and the data bus. Backplane bandwidth marks the total data exchange capacity of the switch, in Gbps, also called switching bandwidth. The backplane bandwidth of a typical switch ranges from a few Gbps to hundreds of Gbps. The higher the backplane bandwidth of a switch, the better the ability to process data, but at the same time the design cost will be higher.
6. What is the switch packet forwarding rate?
The packet forwarding rate of the switch marks the size of the switch's ability to forward packets. The unit is generally pps (packages per second), and the packet forwarding rate of general switches ranges from tens of Kpps to several hundred Mpps. Packet forwarding rate refers to how many million packets (Mpps) a switch can forward per second, that is, the number of packets that the switch can forward at the same time. The packet forwarding rate reflects the switching capability of the switch in units of packets.
7. What are the main factors for selecting an industrial Ethernet switch?
a, backplane bandwidth, two/three layer switching throughput.
b. VLAN type and quantity.
c. Number and type of switch ports.
d. Protocols and methods that support network management. The switch is required to provide more convenient and centralized management.
e, Qos, 802.1q priority control, 802.1X, 802.3X support.
f, electromagnetic compatibility, redundant backup support.
g, switch exchange cache and port cache, main memory, forwarding delay and other parameters.
h. Whether to support dual power supply redundancy input, protection level, whether the MAC address table is automatically updated, line speed forwarding, MAC address table size, etc. are all parameters worth considering, and should be investigated according to actual conditions.

Overhead Crane, commonly called a Bridge Crane, Eot Crane, is a type of crane found in industrial environments. An overhead crane consists of parallel runways with a traveling bridge spanning the gap. A hoist, the lifting component of a crane, travels along the bridge. Usually  there are include many kinds of types crane,  firstly it was divided into single girder and Double Girder Overhead Crane.  There are included normal type, european type, magnetic crane, grab crane, explosion proof crane, and so on. According to the different using environment and different application. We will choose the most suitable crane for customer.