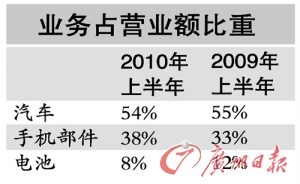 This report (text/list reporter Liu Jun) has just announced that the Shenzhen car company BYD (1211.HK), which has lowered its auto production and sales targets this year, issued an interim report, showing that the proportion of auto business accounted for a slight decrease in revenue, but the first six months of this year The revenue still recorded 12.99 billion yuan, an increase of nearly 50%. BYD said that during the period, the gross profit of the group rose by approximately 63.58% to 5.18 billion yuan.

BYD said that the company continues to promote the A-shares issuance work. The resolution on the issuance of A-shares and authorizations will be extended for a period of 12 months until September 7, 2011 upon approval of the shareholders meeting.