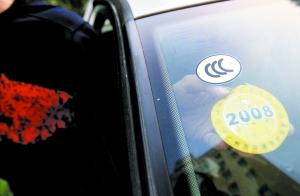 Phase III Environmental Protection Starts on the 15th of this month

The Municipal Environmental Protection Bureau officially issued the "Circular on Implementation of the Third Phase of the Use of Vehicle Environmental Protection Marks to Limit Access Management" (hereinafter referred to as the "Notice"). The implementation of the third phase of the restricted line will be effective from December 15th and will be prohibited 24 hours a day. Vehicles with environmental protection signs pass through Dongguan City; from 8 to 20:00 a day, non-green-label vehicles are prohibited from traveling within the Ring Road (exclusive).

In addition, the reporter found that compared with the previously publicized contents, the "Notice" made it clear that the National II standard diesel vehicle that has received the yellow mark temporarily does not implement the restricted line, and its time for obtaining the "exemption card" is extended to January 16 next year.

Starting from the 16th of next month

Vehicles that violate the regulations on line restrictions will be subject to a fine of 200 yuan by the public security agencies in accordance with Article 58 of the Regulations on Road Traffic Safety of Guangdong Province. However, the Municipal Environmental Protection Bureau stated that from December 15th, 2012 to January 15th, 2013, it is an education period, and only those who violate the regulations will be dissuaded, guided, and educated, and no punishment will be imposed. Starting from January 16, 2013, it will be punished according to law.

What needs to be reminded is that in order to facilitate travel by the public, the National II standard diesel vehicle can enjoy restricted â€œexemptionâ€. That is, the compression-ignition type heavy-duty diesel vehicles registered from September 1, 2004 to January 1, 2008, and the second type of light-burning diesel vehicles registered from July 1, 2006 to July 1, 2008 must be To Dongguan, the environmental protection inspection agency entrusted with the qualification of the provincial environmental protection department has been inspected. After passing the inspection, the company will replace the yellow marking with the seal of â€œNo limit in Dongguan Cityâ€.

According to the "Notice", the national standard diesel vehicles must receive the "exemption" card before January 15, 2013, which is one month longer than the "before December 15, 2012" time specified in the previous publicity.

According to the relevant person in charge of the Municipal Environmental Protection Bureau, the state-standard diesel vehicles travelling on the roads in the restricted area were sampled or received complaints from the public. After the tests failed to meet the national emission standards, they were educated for the first time, and the second time the yellow standard cars were restored. The line-limit management is punished by the traffic police department according to the behavior of the yellow mark car banned area.